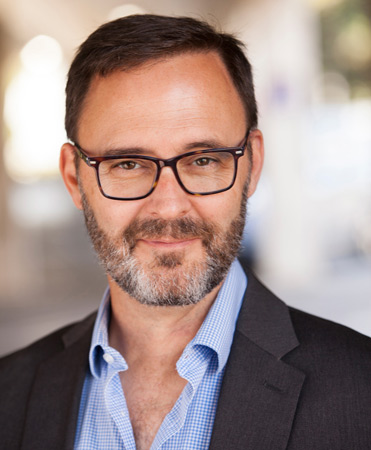 A Quick Blurb About David

David was born & raised in Texas, classically trained in London at The Royal Central School of Speech & Drama.
After his training, he worked in the UK for a decade before moving to LA.  British highlights include being directed by Dame Judi Dench,
playing Hamlet at Kennilworth Castle, and touring the UK in shows ranging from Shakespeare to #1 tours.
Part British, David can “flip” between being American & British.  A former member of the sketch troupe, Lester McFwap,
and the comedy duo Dave & Tom, David is equally at home with comedy or drama — sometimes both.

David is great all around.  What he always brings to the role is a sense of understated comedy founded in reality.
A great find.

You can sort by comedic, dramatic or by the "essences" below.

By Design / Comedic / Seething at Center

David took Sam Christensen’s "Image Essence Workshop" where actors discover their “essences,” or “archetypes,” those qualities that people “get" about them. These are storytelling archetypes or essences of David – i.e. how he slots into storytelling.

David’s quirkiness can range from offbeat to goofy. It seems as though he is marching, if not stumbling along, to the beat of his own drum. This, coupled with an innate “likability,” allows people to easily sympathize with him. In his sketch troupe, his “Indian name” was Furniture-Is-Not-His-Friend (flowing from a natural ability with physical humor).

Because David is so laid-back, most people are surprised to find out, as a child, he had a voracious temper. There is a volcano-like quality of things churning underneath, while the surface seems calm.

There two aspects to this for David: one is being creative; the other is things being “ designed” — thought about a great deal before being implemented.   In the realm of creativity, David is a sort of Renaissance man: a professional photographer, he’s won awards and commissions for his writing, builds furniture, enjoys design, science, and all things creative.

Aside from being a big kid, David has a radiant, playful energy that he brings to both creating and to his interactions with people. It’s hard to miss that he loves life.

The head of the acting program at Central, George Hall, said that David was “Indefatigable.” David has a radiant positivity, love of life, and desire to connect with people that shines through and makes him engaging.

Growing up in Texas, playing football in junior high against kids twice his size, the thing his coach always commented on was how tenacious David was, “Like a dog on a bone — once he bit down he wouldn’t let up.”

In the clips below, you can sort by these essences as well as by “comedic” & “dramatic.”

I am fortunate to work with really lovely and professional agents. Please give them a call.

David Beeler is an amazing talent. He interpreted direction effortlessly as well as added nuances to the lead character that enhanced the film tenfold. I’d jump at the chance to work with him again. 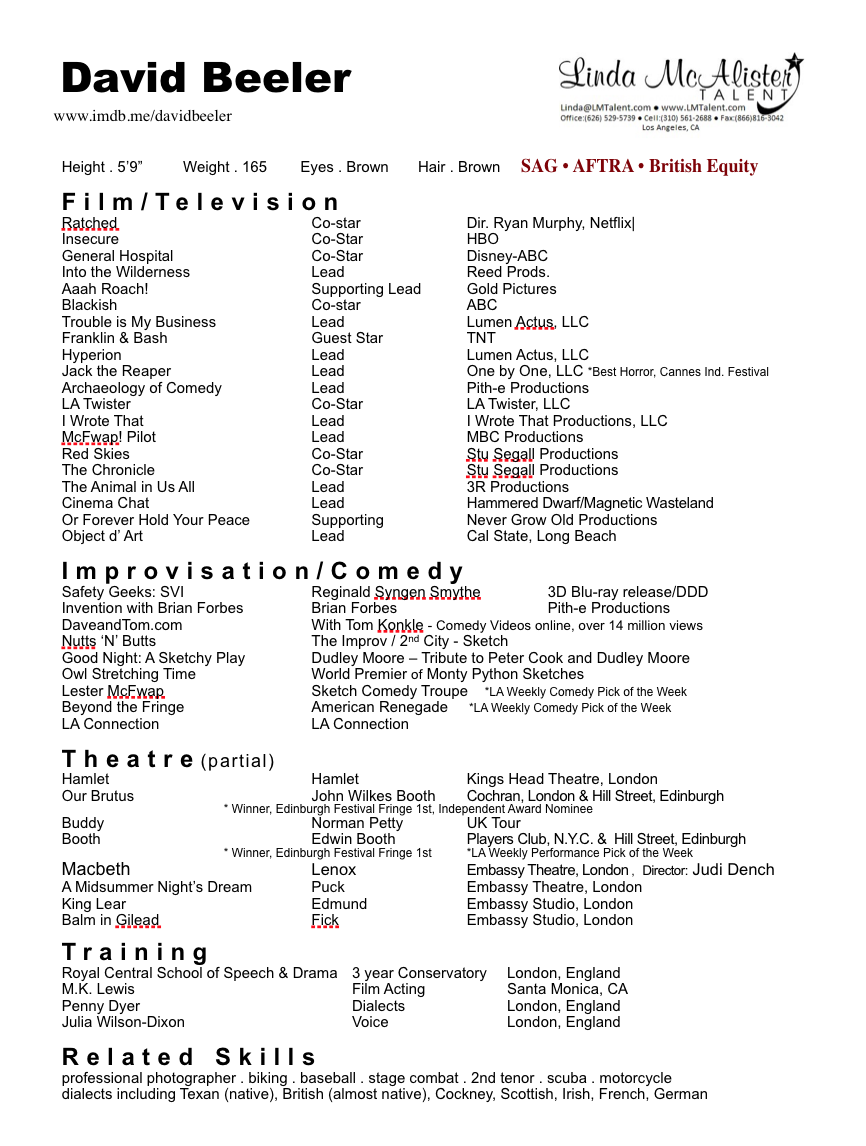 Born and raised in Kerrville Texas, David went to school in London and trained at The Royal Central School of Speech & Drama while Laurence Olivier was the President of the school. David funded his training by writing and producing plays in Texas and learned almost as much paying for school as he did at school.

David worked in the UK for 10 years and highlights include: playing Hamlet in London and at Kennilworth Castle, Norman Petty in Buddy, Young Elvis, Puck, Edmund, and being directed in “The Scottish Play” by Dame Judi Dench.

Booth, a one man show written and performed by David, won a Fringe 1st at the Edinburgh Festival, as did an ensemble piece about John Wilkes Booth entitled Our Brutus which was also nominated for The Independent Theatre Award which transferred into London and led to a writing commission from a West End producer for David.

David was recently seen as an Assistant DA in Ratched directed by Ryan Murphy (Netflix), in Insecure (HBO) as a Stanford panelist, in Blackish (ABC) as an HOA Chair with a problem, in General Hospital (ABC) as propositioned commuter. David has a leading role in the upcoming thriller Into the Wilderness and plays the baddie in the upcoming horror film, Ahhh Roach!!! David played Lew MacDonald, an unscrupulous detective in the noir thriller, Trouble Is My Business, which he also helped produce.  He played a quirky lawyer with a secret life on Franklin & Bash, Mr. Smith in the horror film, Jack the Reaper (winner Best Independent Horror Film, Cannes), and  a priest 20,000 years in the future in the sic-fi film, Hyperion.   He was in the TV film, Red Skies as a gun toting kidnapper and is in the feature film LA Twister (winner Best Ensemble, The Monte Carlo Film Festival).

David was a member of the sketch troupe, Lester McFwap, with numerous live performances in LA and across the country. The McFwap members also produced the eponymous, TV pilot, McFwap!

David worked with comedy writing/performing/producing partner, Tom Konkle, for over a decade and they built a large foot print in new media.  Dave and Tom also produced the feature length comedy, The Archaeology of Comedy for Comedy Express, a subsidiary of National Lampoon.  David starred as Brian Forbes in Invention with Brian Forbes. (Selection ITV Fest), and co-wrote and produced with Tom the Award Winning, Safety Geeks: 3D in which he played the suave, yet totally inept, Reginald Syngen-Smythe.

David was honored that Booth was also the maiden fundraising show in the “Save the Playhouse” campaign (LA Weekly Performance Pick of the Week).

He has appeared in over 100 national commercials, several of which aired in various SuperBowls.

He and his wife, Marieke, (seen in the background shots behind this text with David) are busy with their latest and most significant productions, their two sons, Chayim (“Kai”) and Ryder.